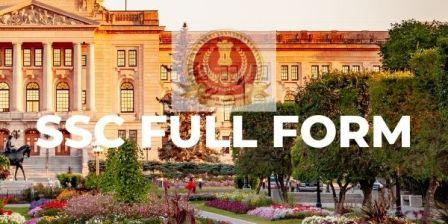 SSC Full Form | Full Form of SSC and other Details

What is the Full Form of SSC?

The SSC Full Form is the “Staff Selection Commission.” It is the Indian Government Organization that conducts various exams at a national level to recruit new employees in different government departments.

It is a government-created entity that is commissioned. SSC is a leading provider of fantastic government jobs. It is the governing organization for various exams and is among the most popular types of exams for graduate students. It has a large number of openings and because it is the first step for young people seeking government employment following graduation.

The Staff Selection Commission (SSC) is a government-run institution in India.  The SSC is the main authority in charge of recruiting staff for numerous ministries and departments. The Subordinate Service Commission was the previous name for the SSC.

It is currently referred to as the Staff Selection Commission. SSC is governed by the Department of Personnel and Training (DoPT), which comprises a Chairman, two Members, and a Secretary-cum-Controller of Examinations. Braj Raj Sharma is the current Chairman of the SSC. Learn everything there is to know about the SSC complete form and how it works.

How did SSC come to be?

Here is the list of exams conducted by the Staff Selection Commission (SSC):

It’s just an annual exam, which means it’s performed once a year. SSC has devised four rounds or tiers to screen candidates to employ young graduates. Tiers 1 and 2 are online, whereas Tier 3 is a descriptive exam and Tier 4 is a skill test.

There are several educational requirements to take the SSC CGL exam. Graduation from a recognized university is the minimum educational qualification. If a candidate passes the SSC CGL Exam, he or she will be considered for positions in Group B and Group C.

Various SSC CGL Group B posts as listed below:

SSC CHSL – What is SSC CHSL and what does it mean?

SSC CHSL is a test for candidates who have completed their 12th exam and wish to be appointed to central government offices, ministries, and departments depending on their skill set. The following positions are available as a result of this exam’s qualification:

SSC JE is primarily an engineering-based examination through which candidates are appointed as Junior Engineers (Civil, Mechanical, Electrical, and Quantity Surveying & Contracts) for different Ministries, Depts., and Institutions in the Indian government.

Qualifying for the SSC GD exams has helped many candidates, making it the most popular career opportunity provider. With their aspirations high, a large number of aspirants, both new and repeaters, take the exam in the hopes of making a difference in their lives and obtaining a decent job through the Staff Selection Commission.

SSC MTS is a Multitasking staff that remains a crucial as well as a demanding job for everyone. It is a terrific opportunity for candidates with a decent salary package because it demands a 10th pass certification.

The Central Police Organization Exam is the full form of CPO. Graduates who desire to work as Sub-Inspectors (SI) in the Delhi Police, Central Armed Police Forces (CAPFs), or Assistant Sub-Inspectors (ASI) in the CISF can apply for this position.

Braj Raj Sharma is the Chairman of the board.

Maharashtra, Gujarat, and Goa are part of the Western Region.

Delhi, Rajasthan, and Uttarakhand are in the North Region.